Fillmore Place was a very late addition to the Williamsburg street grid. When the Village of Williamsburgh was laid out in the early 1800s, Fillmore Place didn't exist. The following is an excerpt from WPA's Fillmore Place Historic District nomination, describing how this one-block long street came to be.

The area of Brooklyn that is today called Williamsburg (without an "h") was, together with Greenpoint, in Colonial times part of the town of Bushwick. One of the five original Colonial-era towns of Kings County (together with Brooklyn, Flatbush, New Utrecht and Gravesend), Bushwick was first settled by French émigrés. The center of the Town of Bushwick, such as it was, was located about a mile east of Fillmore Place, near the intersection of what is now Metropolitan Avenue and Bushwick Avenue.

Throughout the 17th and 18th centuries, the portion of Bushwick that was to become Williamsburg was sparsely populated. A few mansions and summer residences dotted the “Strand” – a road that ran along the edge of the East River from Wallabout bay north to Bushwick inlet (roughly where Kent Avenue is today). Inland, were the farms of various families, including Meseroles, Woodhulls, Morrells, Wyckoffs and Dunhams.

In 1800, Richard Woodhull established a ferry service from Bushwick to Rivington Street in Manhattan. Woodhull’s ferry departed from the foot of the Williamsburgh & Jamaica Turnpike Road, which ran along of the course of today’s Metropolitan Avenue. Within a few years, a second ferry service was established by Thomas Morrell from the foot of Grand Street to Roosevelt Street in Manhattan.

In 1802, Woodhull bought much of the land between the Brooklyn border (at today’s Division Avenue) and the Bushwick Inlet. It was on this tract of land, bordered on the east by Bushwick Creek (roughly where Union Avenue runs today), that Woodhull proposed to establish a new village. In 1802, Woodhull hired Colonel Jonathan Williams to lay out the streets and avenues of his proposed development. It was in honor of Colonel Williams that the Village of Williamsburgh (with an “h”) got its name.

The original plan of the Village of Williamsburgh consisted of a rather confusing array of numbered streets running north to south (with First Street (now Kent Avenue) at the river and Eleventh Street (now Union Street) to the east) and numbered streets running east to west. Grand Street served as the dividing line between north and south, with the east/west street numbers increasing in each direction (North 1st, North 2nd, etc. and South 1st, South 2nd, etc.). Williams’ plan retained a few thoroughfares that existed prior to the establishment of Williamsburgh, most notably the Jamaica Farm Road/Turnpike (which was renamed North 2nd Street in the Williams plan - it did not become Metropolitan Avenue until the early 20th Century).

Because the Jamaica Turnpike did not follow a straight path to the east, North 2nd Street carved an eccentric line through Williams’ otherwise rational grid. The curve of the Turnpike began between Fourth Street and Fifth Street (Bedford Avenue and Driggs Avenue today). This resulted in odd sized blocks between there and the Williamsburgh and Bushwick border. 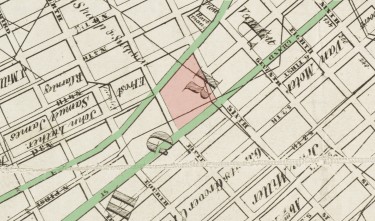 Fillmore Place was not part of the original Village of Williamsburgh, as laid out by Colonel Williams in 1802. North 1st Street always terminated at Fifth Street (Driggs Avenue), while Hope Street to the east started at Sixth Street (Roebling Street) and continued east to the village border at Eleventh Street (Union Avenue).1  The block that was bounded by North 2nd Street (Metropolitan Avenue) and Grand Street, Fifth Street (Driggs Avenue) and Sixth Street (Roebling Street), was thus very deep in its north/south dimensions.

The earliest reference to Fillmore Place comes in an 1852 New York Times article, which notes "Messrs. Clock and Miller have commenced opening, at their own expense, a new street, from South and Fifth-stret [sic], between Grand and North First. It will be built up with magnificent dwellings". The earliest reference to name the street located to date is an 1856 assessment list in the Brooklyn Daily Eagle; this refers to it as Fillmore Street.

Williamsburgh's independence was short lived, however. By 1854, the cities of Brooklyn and Williamsburgh were negotiating the annexation of the latter by the former. In 1855, the City of Brooklyn officially annexed the City of Williamsburgh along with the Towns of Bushwick and Greenpoint (it was at this point, for reasons unknown, that Williamsburgh officially lost its “h”). By that point, Fillmore Place was a part of the Williamsburg street grid, and most of the buildings that you see on the block today were constructed and occupied.