Union Avenue Baptist Church was organized in 1869 by 40 members of the First Baptist Church of Greenpoint on Noble Street. The congregation constructed a frame church on Union (now Manhattan) Avenue, which was dedicated in February or March of 1870.1 On May 14, 1881 the congregation dedicated a new church next door to their old church, which was in turn converted to a Sunday School. The new structure, designed by a "well-known church architect", had two steeples, on e 65' tall and the second 90' tall. The brick structure had Italian tile trim and terra-cotta decoration at the two entrances.2 The "well-known church architect" referenced by the Times was Lawrence Valk, indeed, a prominent church architect3.

Rev. U. B. Guiscard was the first pastor of the Union Avenue Baptist Church, installed on November 3, 1870.4 Rev. David Charles Hughes became the pastor of Union Avenue Baptist Church in October, 18745. Rev. Hughes was the father of Charles Evans Hughes, governor of New York in the early 1900s and later Chief Justice of the U. S. Supreme Court. Hughes resigned abruptly in March, 18846,  and was succeeded by Rev. Folwell, formerly of Waterbury, Conn. in June of 1884.7 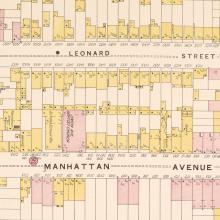