Another Fillmore Friday excerpt from WPA's nomination for the proposed Fillmore Place Historic District. This week, a bit about the developers Clock & Miller, the buildings themselves, and who lived there.

Alfred Clock was born in Darien, Connecticut, in 1802. As early as 1832, he was in Williamsburgh investing in real estate. His daughter Eveline married Jeremiah Meserole, thus marrying into one of Williamsburgh’s most prominent families. Together with Miller, Clock Sr. purchased at least one property from Jeremiah’s father, Abraham Meserole.

Although they sold most of the Fillmore Place properties soon after the new street was laid out, Clock & Miller held onto and rented out some properties into the late 1850s. The pair also owned properties at 86 North Second Street (now Metropolitan Avenue) and 189 Grand Street.

Patterns of Development and Ownership 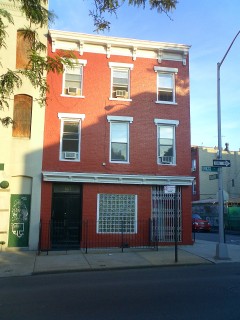 667 Driggs Avenue. Sold by Clock & Miller to attorney/investor Charles Briggs in 1854. The ground floor historically housed a store, and was home to Peper's grocery & liquor store in the 1860s and Gorman's dry goods store in the 1880s and 1890s. The rear of the property, on Fillmore Place, contained a stable (now a separate lot).

Clock & Miller began acquiring the Fillmore properties in 1847, and appear to have completed acquisition by 1852. While the development concept (the master plan) and the cutting through of Fillmore Place appear to have been the work of Clock & Miller, there may have been other partners and speculators involved in the development and construction of Fillmore Place. Three other people bought multiple lots from Clock & Miller very early in the course of development. These included John Hamilton (acquired 675 and 677 Driggs in 1853); Absalom Roper (acquired 9, 11 and 27 Fillmore in 1852); and Jacob Sheppard (acquired 12 and 26 Fillmore in 1856 and 1860, respectively). Each of these development partners held onto their properties for a very brief period – at most five years, and usually one to three years. In addition, there appear to have been a number of other development partners or speculators who bought into the project early on and sold their properties with a year or at most two years. These include attorney Charles Briggs (667 Driggs), pilot William Gibson (30 Fillmore) and John O’Rourke (24 Fillmore). Although other developers and possibly builders were involved in the Fillmore Place development, it is clear that all the buildings were designed by the same hand, using the same palette of design details.

There were, of course, many who bought into the project for long-term investment purposes. Most of this latter class of buyers lived in the houses they purchased, for anywhere from 5 to 25 years. Buyers in this class, all of whom bought directly from Clock & Miller, include painter/paper hanger Enos Baker (10 and 24 Fillmore, 7 and 16 years respectively); joiner Thomas Coger (19 Fillmore, 20 years); and coppersmith Charles Heyman (170 Roebling, 31 years). 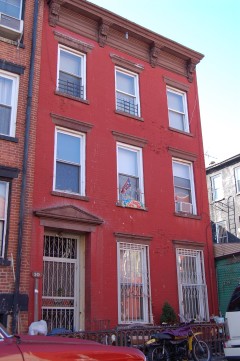 10 Fillmore Place. Sold by Clock & Miller to Enos Baker, a painter and paper hanger. Baker, who also owned 24 Fillmore, lived at number 10 until the early 1870s.

All of the Fillmore Place buildings were occupied as multi-family residences – what were probably termed at the time flat houses (a class above the tenement, a term that was only coming into widespread usage in the 1850s). The patterns of ownership and occupancy in later years very closely match that of the surrounding area of Williamsburg. In the mid-19th century, most of the owners were English, Irish or German, and worked as artisans or were petty merchants. The residents renting apartments on Fillmore Place at this time were of a similar background, usually artisans, clerks and laborers.

By the late 19th-century there was an increasing representation of Eastern Europeans among the owners and renters. These included Christian and Jewish Poles, Lithuanians, Estonians and Ukrainians. The Jewish residents represented the advance wave of Jewish immigrants who moved from the Lower East Side in large numbers beginning in 1903, with the opening of the Williamsburg Bridge. From that point forward, much of the Southside and South Williamsburg came to be predominantly Jewish. Although the Williamsburg Bridge was certainly the catalyst for large number of Jews relocating to North Brooklyn, the influx of Jews certainly predated the construction of the bridge, as witnessed by the owners and residents of some of Fillmore Place buildings. Many of these earlier Jewish residents worked in the garment trades, as furriers, tailors and cutters.

The Christian immigrants from Eastern Europe tended to settle in the Northside, with Grand Street seeming to be the soft dividing line between what was becoming Baltic and Polish Williamsburg to the north and Eastern European Jewish Williamsburg to the south. Through 20th century, Fillmore Place continued to attract Baltic and Polish émigrés. Beginning in the 1930s, Hispanic names begin to appear in the conveyance and directory records, reflecting the influx of Puerto Rican transplants. Over time, Southside Williamsburg would come to be one of the largest centers of Puerto Ricans in New York City, a demographic heavily reflected in Fillmore Place.1

Many of the Fillmore Place property owners owned multiple houses on the block. This was the case in the early years of development, when speculators bought multiple properties from Clock & Miller. In the late 19th century and early 20th century, William Dailey bought up numerous properties. On his death circa 1929, Daily owned at least four houses on Fillmore Place.