Second Calvary Protestant Episcopal Church, located on Bushwick Avenue. Calvary P. E. Church was founded in Williamsburg in 1849. Its first church was in temporary quarters at the corner of Berry (Third Street) and Grand Streets. Shortly thereafter the church found a permanent home on North 5th Street, where it stayed for a decade or so. By 1867, the church had constructed a larger structure on South 9th Street and Eighth Street (Marcy Avenue). The church remained there until 1902, when it sold its property (including an adjacent rectory) to the Y.M.C.A. of the Eastern District for $38,500.1 (Various articles say, incorrectly, that the church was sold and demolished for the construction of the Williamsburg Bridge.)

Following the sale, Calvary purchased St. Barnabas Episcopal Church, a wood-frame structure on Bushwick Avenue between Grove and Greene Streets for $17,000.2 The church was reconsecrated as Calvary Church in October, 1903.3 On February 6, 1910, a fire destroyed the former St. Barnabas building and Calvary embarked on a new building campaign. The cornerstone for the new church was laid on October, 1910 and the new structure opened for services on March 11, 1911.4  The new building was a brick structure, designed by architects Dodge & Morrison.5 In 1957, Calvary Church merged with St. Cyprian's Church, and the congregation continues to occupy the property to this day.

Originally on the Southside, forced to sell for bridge construction. 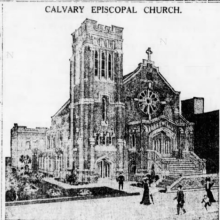 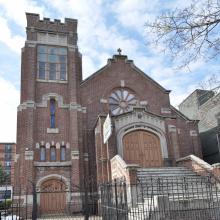 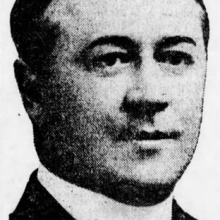