The northwest corner of Evergreen Avenue and Woodbine Street is believed to be the site of first house constructed in the New Bushwick Lotts, an area granted by Peter Stuyvesant to the residents of the village of Bushwick in 1661. The first house was erected here in about 1700, built by a man named Van Nuyse. The house and three lots (about 70 acres total) were purchased by Leffert Lefferts from William Van Nuyse of New Utrecht in 1724. Lefferts purchased 40 additional acres from Auke Rynerse in 1728, and another 27 acres from Johannes Durjee and Abraham Shenck in 1753, bringing the total acreage of his farm to 136 acres, plus an additional 25 acres of woodland in Bushwick and Newtown. Lefferts' son, also named Leffert Lefferts, sold the farm to Jacob Suydam in 1768. Suydam's grandson, Adrian Martense Suydam, was born in the house in 1826. Prior to being sold off for building lots, the farm extended from Knickerbocker Avenue to Broadway and from Jefferson Street to Palmetto Street.1

The Suydam House was demolished towards the end of the 19th century and the property purchased by the Second German Baptist Church. The church was constructed starting in 1900.2 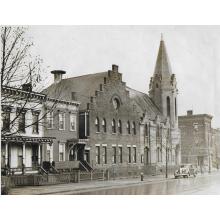