The parish of St. Mark’s Evangelical Lutheran Church was established in 1868 on Evergreen Avenue; however, the building quickly became too small for the increasing number of congregants and to inadequacy of the building to provide school accommodations for the children. The new site at the southwest corner of Bushwick Avenue and Jefferson Street was purchased in 1885. Three new buildings were built on the site – church, school, and rectory – and dedicated together in 1892 with a celebration that lasted for several days. Together the three buildings, designed by Theobald Engelhardt and built by Dornbach & Barndis, created a continuous street frontage of 120 feet along Bushwick Avenue. All three buildings were constructed of brick, Nova Scotia sandstone, granite and terra cotta, and the church and school are designed in the Gothic style.

As building committee’s priority and the first structure to be built on the new site, the schoolhouse was completed and the children transferred to it in October 1885. The schoolhouse was built on an 80’x40’ lot to adjoin the church on one side. Built in two parts, the front portion of the schoolhouse was two stories high and used by the church societies, the board of trustees, and the janitor while the rear portion was three stories high with four classrooms on each floor to accommodation a total of 800 pupils. A playground and cellar on the site also served for recreation sites. 1 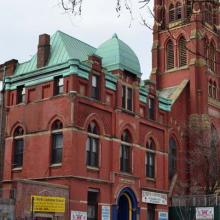