From the Bushwiki (Matthew Kuhnert, author):

Theobald Mark Engelhardt (1851-1935) was one of Brooklyn’s most prolific architects, designing thousands of structures that reflect a full range of building types, from factories and churches to commercial establishments and residences. Born in Brooklyn, his father was Philip Engelhardt, a political refugee from Baden who emigrated to the United States along with his wife, father, and sisters after the failed political revolutions of 1848-49 in Germany.1 Theobald M. Engelhardt received his early education at the Williamsburgh Turn Verein school and Brown’s Business College—and later enrolled at the Cooper Institute, from which he received a certificate in the study of architecture in 1869.2 He apprenticed in the office of his father, who was a successful carpenter and builder in Brooklyn’s Eastern District, where he was engaged with preparing plans and specifications as well as supervising the construction of buildings. Philip Engelhardt is credited with the design of the original buildings of the Williamsburgh Turn Verein, as well as numerous breweries and malthouses, including the first brew plant for the S. Liebmann & Son’s Brewing Company and the Lanzer brewery.3 It is probable that the son worked closely with his father on these commissions and gained much practical experience and technical knowledge during his apprenticeship, as well as valuable connections to future clients. After his father retired in 1877, Theobald M. Engelhardt established his own architectural office at 14-16 Fayette Street, and, in 1885, the practice moved to a building that he designed for himself at 905-907 Broadway.4

During his career, Englehardt designed numerous buildings in a wide variety of architectural styles, mainly in Bushwick, Bedford, Williamsburg, and Greenpoint. Examples of his work include St. John’s Lutheran Church (1891) and several residential buildings within the Greenpoint Historic District; factory buildings at 60-64 Kent Street (c. 1895), now part of the Eberhard Faber Historic District; the former Maison au Candy Company (1885) in the Brooklyn Heights Historic District; and the Pirika Chocolate factory building (1895) and the former Trinity German Lutheran Church (1905) in the neighborhood of Cobble Hill.5 Within the Bushwick Avenue study area, Engelhardt designed numerous residences, as well as the Eastern District Turn Verein (1902), Arion Hall (1886 and 1902), and St. Mark’s Evangelical Lutheran church and school (1892). In 1893, when the Jamaica Bay Yacht Club purchased the Peter Wyckoff mansion, Engelhardt directed and managed the removal of the building from its original foundation and relocation to Jamaica Bay by boat.6

Engelhardt was a prominent member of Brooklyn’s German community and a board member of many local institutions, such as the German Savings Bank, the People’s Bank of Brooklyn, the German Hospital, the Builders’ Exchange of the Eastern District, the Brooklyn Board of Trade, the Manufacturers’ and Dealers’ League of the City of New York, and the Brooklyn Institute of Arts, a forerunner of the Brooklyn Museum of Art. He was also an active member of many social clubs and organizations, including the Eastern District Turn Verein, the Arion Singing Society, the Brooklyn League, and the Civic Club of the borough of Brooklyn.7 By 1915, he had relocated from Brooklyn to Richmond Hill, Queens, and lived there until his death at the age of 84.8 After graduating from the Pratt Institute and the University of Pennsylvania, his son, Theobald Henry Engelhardt (1886-1964), followed family tradition and joined the architecture practice in 1908. He would later design many multi-family dwellings in Queens, including the Portsmouth Apartments (1928) and Dongan House (c. 1925), as well as commercial properties for the Cord-Meyer Development Company in Forest Hills.9 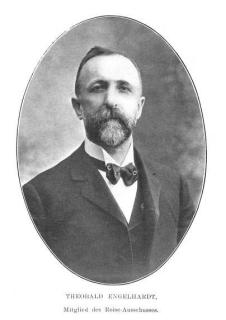