Constructed as the Bedford Avenue Theater in 1891, renamed Empire Theater in 1893. Circus promoter William Washington Cole was listed as the owner on the Buildings Department filings1, but most newspaper accounts describe Albert E. Richards as the proprietor of the theater and Laurent Howard as the manager2 Richards had worked for Cole for 15 years3, so it seems likely that the two continued their association through the construction of the Bedford Avenue Theater. (Richards had also been proprietor or manager the Novelty Theater on Driggs.)

The cornerstone for the building was laid on 20 June 1891, in a ceremony overseen by the Brooklyn Protective Order of Elks (of which Richards and Howard were members). William Gaylor, the architect of the theater participated in the ceremony as well.4 The theater seated 1,778 patrons on three levels and opened on 5 October 1891 with a performance of “A Jolly Surprise”, starring Fanny Rice.5

Following Richards’ death in 1892, the Bedford Avenue Theater continued to produce theatrical plays. By the summer of 1893, it had been renamed as the Empire Theater and under the direction of Johnson and Washburne, was producing work “of a more melodramatic order”.6. In its first years as the Empire it was accused of flouting of laws prohibiting theater performances on Sundays with performances aimed at German audiences.7 In 1896, the theater was renovated and reopened as a vaudeville and variety venue ("with the occasional burlesque") under the management of Hyde and Behman.8

The rear of the theater was removed ca. 1901 for the construction of the Williamsburg Bridge. Following the removal of the rear part of the theater (including its stage), the building was slated to be converted to a knitting factory by Messrs. Plate and Clark.9 Apparently this conversion did not happen, as in 1906 the Ford Motor Company leased the building from the Hyde and Behman Amusement Company for use as an automobile garage.10 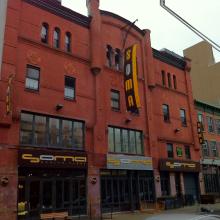 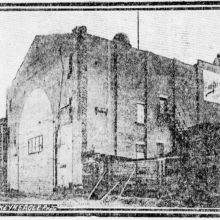