William H. Gaylor was born in Stamford Conn on March 8th, 1821. He attended grade school in Stamford through the age of 9, after which went to live and work on the farm of his maternal uncle, John Schofield. At the age of 15, Gaylor decided to pursue a career in carpentry and building, and entered the service of Edwin Bishop, a "successful carpenter and architect". Gaylor remained with Bishop for three years, at which time he moved to Williamsburg, Brooklyn and entered into the service of Messrs. Golder and Folk, Master Builders. Gaylor stayed with Golder and Folk until he reached 21 years, whereupon, "having fully perfected himself in a practical knowledge of his calling, he began business for himself".1

Gaylor was a prolific architect, designing "imposing public edifices"2 as well as many commercial and residential buildings, primarily in Brooklyn. He is best known for his design of cast-iron buildings, including 2 Wooster Street in Manhattan (1871-73) and three buildings for the Smith, Gray & Co. firm - the Lyceum Building (1873-75), 894-896 Manhattan Avenue (1877-78) in Greenpoint and the main Smith, Gray building (1884) at 126 Broadway in Williamsburg. He also designed the Bedford Theater (1891), and the Smith, Gray & Company Building at 103 Broadway in Brooklyn (1870; an individual landmark) is attributed to him. 3

In January 1882 Gaylor was appointed Commissioner of the Department of Buildings by Mayor Seth Low.

Gaylor married Matilda Cocks of Brooklyn in 1849. After Matilda's death in 1861, Gaylor married Lizzie Burr of Brooklyn (she died in 1879). Gaylor had seven children, three by first wife, four by second. Son John W. Gaylor was a dealer in bricks, lime and building materials, and a second son, Edward F. Gaylor, Esq., was an architect active in Brooklyn.4 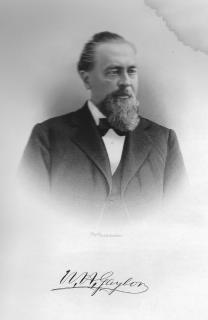