The Parish of the Annunciation of the Blessed Virgin Mary was founded in 1864, an offshoot of Most Holy Trinity Church on Montrose Avenue. The first church building for the predominantly German Annunciation congregation was probably a wooden structure located on the northwest corner of Havemeyer and North Fifth Streets, where the school is now located. Rev. John Hauptmann was the first priest of the parish. The existing church, designed by Francis J. Himpler, was constructed in 1870.

Rev. John Hauptmann (or Hauptman) was born about 1824 in Germany. Following religious training in Germany, Hauptmann emigrated to United States, where he finished his training at St. Vincent's Seminary in Pennsylvania. Hauptmann came to Brooklyn in 1859, where he became an assistant to Father May at Holy Trinity Church on Montrose Avenue. He was ordained at Holy Trinity on May 10, 1859.1

Joseph Earnest (or Ernst), a German seminarian who trained at the Benedictine College in Allegheny, Penn. was ordained by Bishop Loughlin and gave his first mass at Annunciation Church in 1889. Earnest's family were members of the Annunciation Church congregation.2

Hauptmann died on June 10, 1891. He was succeeded by Rev. George Gaupert, who had previously served as one of the assistants at Holy Trinity Church. Gaupert was born in Annunciation parish, and had been an attendant at the church when it was located across Havemeyer, where the school is now located. He studied at St. John's and prior to Holy Trinity had served at a church in Niagara. Rev. Ernst continued on an assistant to Gaupert.3

In 1889, Annunciation parish undertook a major expansion of its campus, for which it hired F. J. Berlenbach, Jr. as its architect. The first building in this expansion was the convent, located on the west side of Havemeyer Street just north of North 5th Street. According to the Real Estate Record and Builders Guide, the convent was built to house the Sisters of Dominic, who prior to this time were located at Graham and Montrose Avenues. In 1892, under the direction of Gaupert, Berlenbach designed the school at the corner of Havemeyer and North 5th. Both buildings are constructed of red pressed brick. The convent is trimmed in Belleville stone (a lighter-colored sandstone from New Jersey) and terra cotta.

In 1914, the Annunciation Parish was taken over by a Lithuanian congregation and became a Lithuanian national parish, which is how it continues to operate today (although its services now include a daily mass in Spanish). The convent was converted to cooperative apartments in 1984. That project was funded by a revolving loan fund operated by the New York Landmarks Conservancy, and was completed largely with the sweat equity of the shareholders. The school building continues to operate, now as a school as a community services center. Northside Neighborhood School operates its preschool and grade school out of part of the building. The rectory (which probably dates to the mid-1870s) was converted from a one-family to a two-family residence in 2002. 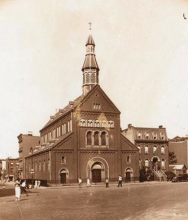