Our Lady of Mount Carmel was the first Roman Catholic parish founded in the county of Queens. The parish was founded in 1841 or 1843, before the founding of the Diocese of Brooklyn. As such, Mt. Carmel was founded under the auspices of the Diocese of New York. The parish was founded by Father Michael Curran, who traveled from his parish in Harlem to what was at first a mission church. The first church building dated to 1840, predating the founding of the parish itself. The parish constructed a new church between 1871 and 1873, and it was given a new facade designed by Thomas Poole in 1915. 1 The 1873 structure is the oldest extant Catholic church in the county of Queens.2 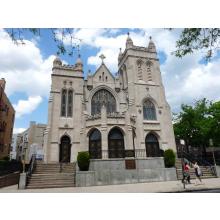