The "congregation founded by 65 German emigrants who had settled in the old village of East New York, in the town of New Lots, now the 26th Ward. The congregants first met in the Sackman homestead on Liberty Avenue, which was then known as Virginia Road, at the corner of New Jersey Avenue. Founders included Frederick Middendorf, president of the East New York Savings Bank... The village at that time was divided in three sections, known as Plunders Neck, BonaFettle [?] and Blood Hollow. The first two sections were German, the latter Irish... Rev. F. G. Zenner was the first pastor. A 30x45 frame building was dedicated on September 17, 1847. In 1851, Zenner was succeeded by Rev. C. Schirm, who was followed by Rev. F. Camman, the Rev. J. Grim and the Rev. F. C. Brunecke. Schirm was recalled in 1854 and ministered for ten years Rev. J. F. Flath assumed charge in 1864... In 1868, the building was enlarged to it present size, 45x65 deep. Flath retired in 1888. Followed by E. Hartman for three years and then Justus F. Holstein"1 The laying of the cornerstone on October 17, 1897 marked the 50th anniversary of the church's foundation.2 The church was dedicated on May 2, 1898. The Brooklyn Daily Eagle described the building as having a "cathedral like front of 58 feet, of rock faced brick, trimmed with red sand stone. It is 86 feet in depth. On the southeasterly corner there is a tower or steeple 103 feet high… The ground floor will be used for a Sunday school and lecture room. It will accommodate 600 pupils."3 Real Estate Record and Builders' Guide (v. 60, no. 1541: September 25, 1897), 446. 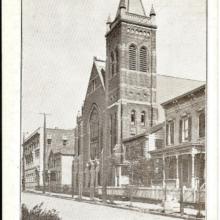 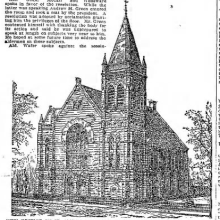 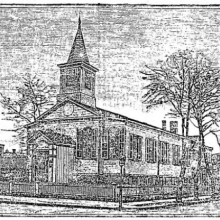