The First Methodist Church of Williamsburgh (now the South Second Street Methodist Episcopal Church) was organized in 1806, making it the oldest ecclesiastical organization in the village of Williamsburgh, and the second oldest church in the Town of Bushwick 1. The first church building was erected in 1808 on the old Williamsburgh & Jamaica Turnpike (now Metropolitan Avenue) between Bedford and Driggs Avenues 2. The original church was remodeled in 1821 and remained standing as least as late as 1845, by which time the congregation had relocated to South 2nd Street.3

Work on the South 2nd Street structure was begun in 1837 and completed in 1839, with the dedication taking place on January 8, 1840. The roof of the church was ripped off during an 1853 storm and the church was extended as part of the rebuilding from that disaster4.

The interior of the church was redone in 1875, and the exterior may be of the same vintage. Armbruster says that the “entire interior and façade” were redone in 1875, while the Eagle says that the front was only “in part remodeled”, with three entrances instead of the original one5 Both sources agree that the wing to the west of the church was added as part of this renovation.

At the time of the construction of the South 2nd Street Church, the congregation numbered about 50. By 1867, the church had over 600 congregants and had spawned a number of spin-off churches. With the exception of St. John’s, all of the Methodist churches in the Eastern District dating to the 19th century were spun off from First Methodist Episcopal.6

In 1873, the Sunday school had 612 pupils, making it the third largest amongst Methodist schools in the city 7.

First Methodist Episcopal Church (E. D.). The first ecclesiastical organization in the village of Williamsburgh, and the second in the old town of Bushwick, was formed about the beginning of the present century. Their first house of worship was erected in 1808, on North Second street, between Fourth and Fifth; was repaired in 1821, and was still standing in 1845; but in the year 1837, the society having greatly increased, the foundation of a spacious brick church was laid on South Second street, between Fifth and Sixth streets. The church here was organized in August, 1838, its first trustees being David Garret, Henry E. Bodwell, Geo. W. Pitman, John L. Gray, Simon Richardson, and James D. Sparkman. The building was erected in 1839, and dedicated on the 8th [?] of January, 1840, at which time there were about fifty communicants, and such has been the rapid increase of the congregation, -that all the Methodist churches of the Eastern District of Brooklyn (with the exception of St. John's), have since been colonized from it. Notwithstanding the mother church thus sent out so many, it continued full. During the pastoral care of Rev. C. B. Sing, in 1866, the debt of the church, which had rested upon it like an incubus for thirty years, was entirely paid off. The building was unroofed in the great storm of 1853, when a number of church steeples were blown down; it was then extended, and is now the largest and oldest Methodist Episcopal church in that part of the city. The present membership is about six hundred; about one thousand two hundred persons can be accommodated in the building. The church is justly celebrated for its large and prosperous Sunday school, which numbers about one thousand children. 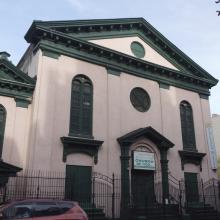 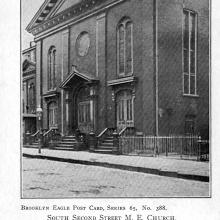 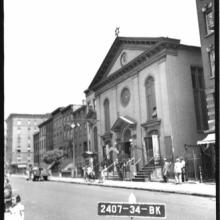 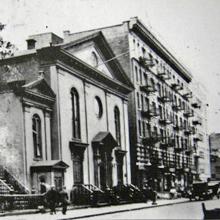