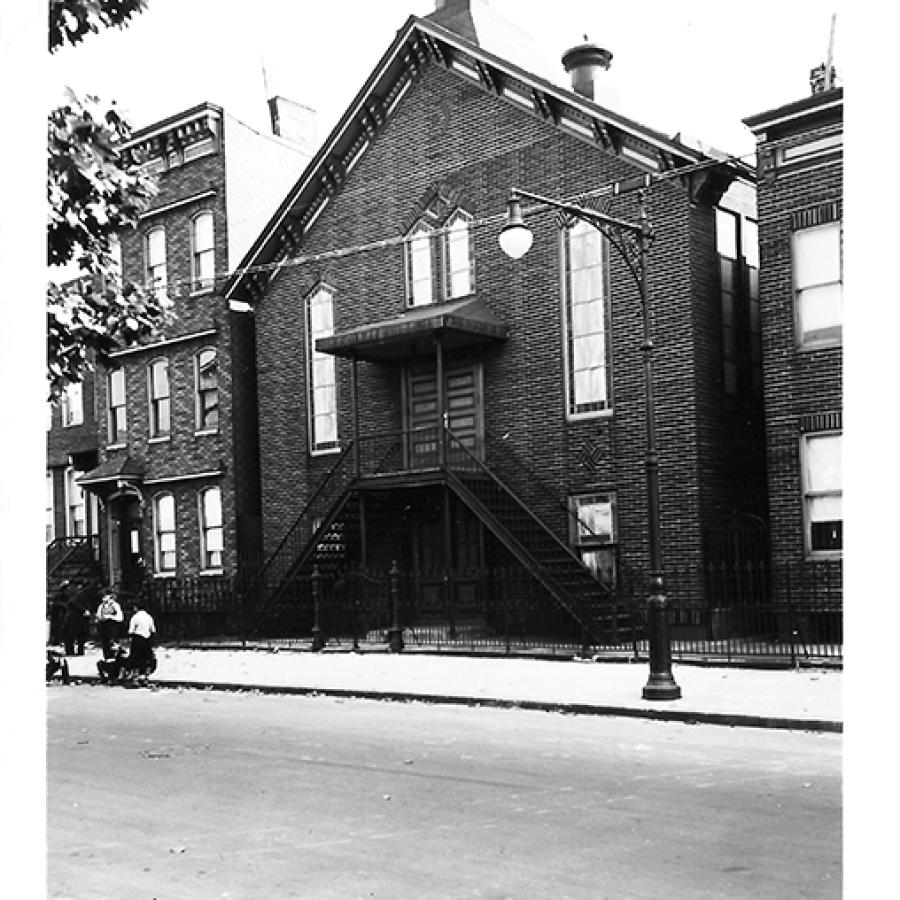 Church and parish house next door (104 Powers) constructed in 1885, O. H. Doolittle, architect.1 The former Gothic Methodist Church, which had been located at the corner of Grand Street and Manhattan Avenue since its founding in 18462 , moved to this location in 18853 . The Church may have been affiliated with the Second Methodist Episcopal Church, on South Second Street.

The Powers Street Methodist Church appears to have folded sometime around 1900, and by 1904, the building was occupied by the Powers Street Gospel Mission Church (organized 1890)4 . In about 1913, the church and parish house were sold to the 13th Assembly District Realty Co., and the church became the clubhouse and assembly hall of the local Democratic party.5

In the early 1930s, the buildings were sold to the American Mohammedan Society, and the former church was converted to a mosque. According to a number of sources, 106-108 Powers Street was the first mosque founded in greater New York City.6  Clearly there were other Muslim places of worship in the City prior to 1930, but these would have been in private homes or other facilities, not dedicated mosques. There was at least one earlier mosque, that established on Broadway in Manhattan in 1895 by Alexander Russell Webb, an American convert to Islam. But Webb’s mosque appears to have closed soon after it opened. So the claim that the Powers Street Mosque is the first in New York City appears on its face to have some credibility.

The American Mohammedan Society was organized in Brooklyn on February 2, 1907 by a Tatar Muslim community in Brooklyn, and formally incorporated by the State of New York on December 10, 1927.7 The Society was founded by a group of Lipka Tatars, Muslims who had established themselves in the Grand Duchy of Lithuania in the 14th Century.8   The group that settled in Williamsburg, Brooklyn appear to have originated in Bohoniki, a town in present-day eastern Poland near the border with Belarus.

The exact date at which A.M.S. acquired the former Powers Street Methodist Church has not been determined, but appears to be between 1930 and 1932. Samuel Raffel (Rafalowitz), who is described as the “religious leader” of the congregation in a 1952 article, took up residence at 104 Powers in 1931. The 1930 U.S. Census shows Samuel Raffel living at 37 Leonard Street. At that time, Raffel was recorded as 47 years old, working as a dyer in a fur shop. His wife Mary, 39 years old, and their five children, make up the household. Both Sam and Mary list their birthplaces as Russia (Bohoniki was part of Russia prior to World War I); Sam emigrated in 1907, and Mary in 1901. Both husband and wife are recorded as speaking Yiddish, but no English, an interesting, and perhaps incorrect, recording. The 1940 shows the family living at 104 Powers Street, with Sam unemployed and unable to work.

The 1925 and 1930 censuses and the 1952 article refer to Sam as Raffel. The early 1930s telephone directory and the 1940 census refer to him as Rafalowitz. The names seem to have been used interchangeably. The 1940 directory, for instance, lists Sam Rafalowitz and his son, Alex Raffel.

The activities of Raffel, the A.M.S. and Powers Street Mosque are not well documented in the public record. The mosque continues to operate as a congregation of Muslim Tatars, largely descended from the original founders who moved to Williamsburg at the very beginning of the 20th Century.